Skip to content
Potentials of Winery and Olive Oil Residues for the Production of Rhamnolipids and Other Biosurfactants: A Step Towards Achieving a Circular Economy Model

Potentials of Winery and Olive Oil Residues for the Production of Rhamnolipids and Other Biosurfactants: A Step Towards Achieving a Circular Economy Model

Vineyard and olive farming are deeply rooted in the economy, culture, and even the welfare of Mediterranean countries. Although numerous approaches and methods were developed to valorize their agricultural residues, several challenges remain to overcome moving towards the Circular Economy (CE). Conventional treatments of winery and olive mill wastes are becoming increasingly expensive, demanding significant amounts of effort, resources, and energy for safe waste discharge. Therefore, the need to recycle, reuse, and recover energy and valuable biocompounds from the wastes of these two sectors become apparent. In the context of increasing waste production, climate change, coupled with dramatic rises in demand from a much larger global population and customers, CE offers the prospect of a better future. Microbes are able to produce diverse biosurfactants (BS) containing both hydrophilic and hydrophobic moieties that could interact with surfaces, lower surface and interfacial tensions, form micelles, and emulsify immiscible substances. Among several BS classes, rhamnolipids are glycolipids produced by some gram-negative bacteria with various potential applications in numerous fields, including bioremediation of contaminated soils. In contrast to several biosurfactants, this particular class of glycolipids is among the economically competitive biomolecules with its synthetic equivalents. For that, we highlighted the main opportunities, the challenges, and the future aspects towards the production of this particular type of glycolipids using winery and olive oil wastes. Therefore, we proposed the critical points that should be assumed through the path of successful strategies for rhamnolipid production using these two potential agricultural residues. This review might help at boosting the current attempts to find novel CE models. 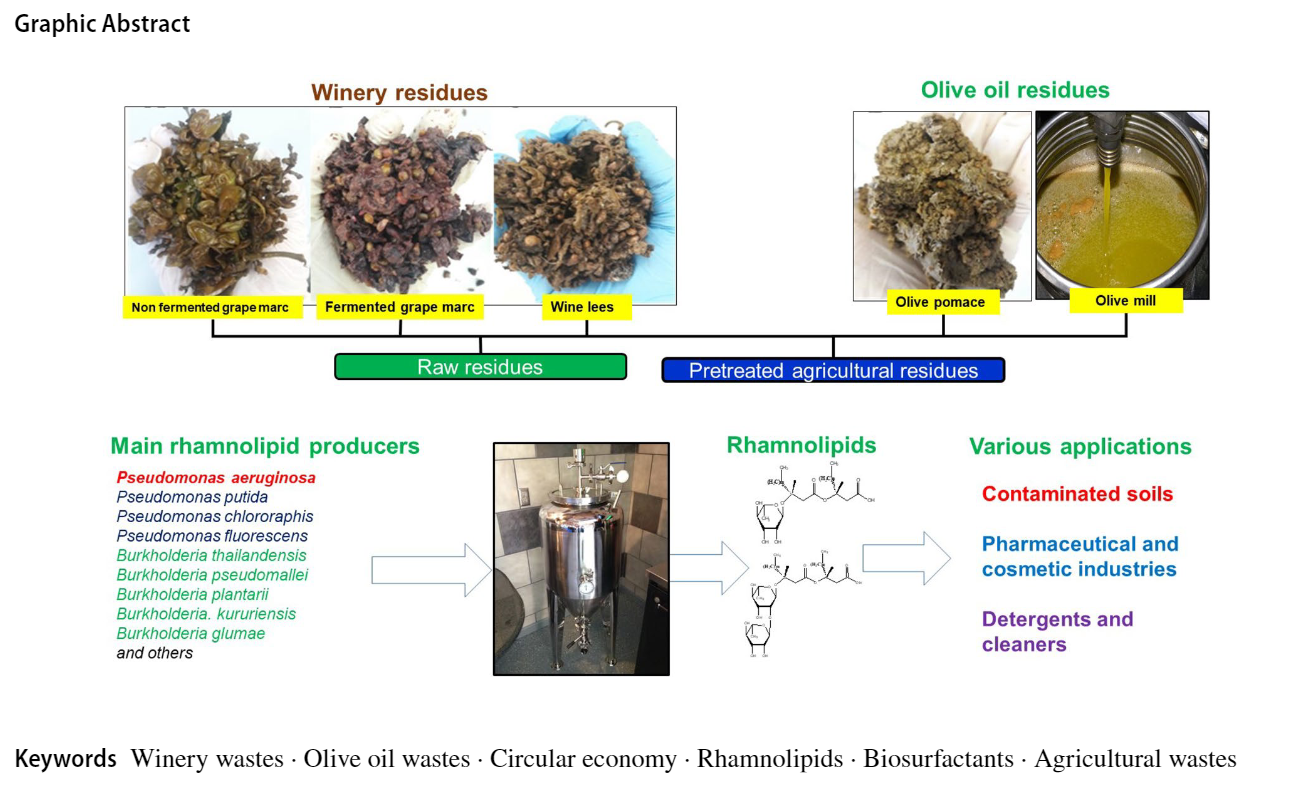